Griezmann ridiculed after his missed penalty 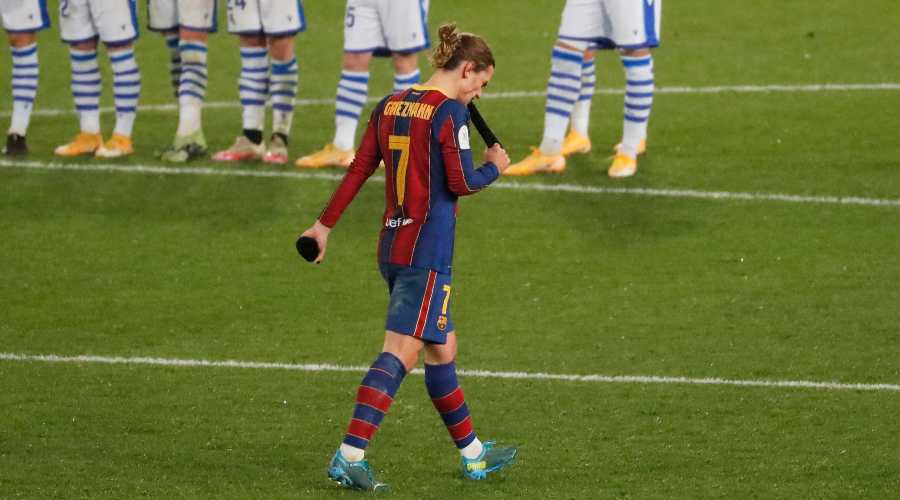 Antoine Griezmann took a lot of money after his failure in the penalty shootout won by Barça in the semifinal of the Supercopa de Espana.

The roller coaster continues for Antoine Griezmann with the FC Barcelona. To his advantage this weekend during the great success achieved by Barça against Granada, on the occasion of the 17e Liga day, the tricolor world champion disappointed again on Wednesday during the semifinal of the Spanish Supercup against the Real society.

After his double scored on Saturday, the tricolor world champion was nevertheless at the origin of the opening of the score signed Frenkie de Jong, thanks to a cross perfectly taken from the head by the Dutch midfielder. But for the rest, the Frenchman was very discreet, taking very little initiative, unlike a Ousmane Dembele, certainly very messy but also very restless. And this while Lionel Messi had been preserved because of pain in the thigh.

And Antoine Griezmann had not finished with his bad evening. While the outcome of the semi-final was played on penalties after the two teams drew (1-1), the Mâconnais indeed completely missed his attempt, his ball flying over the goal from Alex Remiro. A failure which tarnishes a little more its record in the exercise. More fear than harm nonetheless for the former Madrilenian, the latter being able to thank Marc-André Ter Stegen as well as Riqui Puig, author of the decisive shot.

Despite a penalty missed by Antoine Griezmann and thanks to ter Stegen, FC Barcelona is qualified for the final of the Spanish Supercup to follow this Sunday!#lequipeFOOT pic.twitter.com/wYeQUA35UL

Nonetheless, this failure has been the subject of much ridicule on social media, with Internet users rejoicing.

GRIEZMANN’S GOAL SHOT THROUGH THE WING OF A PLANE pic.twitter.com/DOGqqAs4Lo

Jumbo the Antarctic penguin has found the balloon of Griezmann’s peno pic.twitter.com/JM9Fwo8Xyl

“We are going to play the qualification against Mali”

Cameroon will face the Eagles of Mali on Wednesday, for a place in the quarterfinals of CHAN 2020. Read the full news The...
Read more
Sport

Author of 9 goals and 6 assists in 18 Ligue 1 games, Andy Delort is the flagship striker of Montpellier. In addition to being...
Read more
Sport

Juventus Turin won their 9th Italian Super Cup with a 2-0 victory over Napoli. Cr7 and Morata scored. While the...
Read more
Sport

Sevilla FC goalkeeper Yassine Bounou saved his team from a draw against Deportivo Alavés (1-2), taking out a penalty in the 91st...
Read more

USA: Covid toll heavier than that of World War II

New President Biden has arrived at the White House