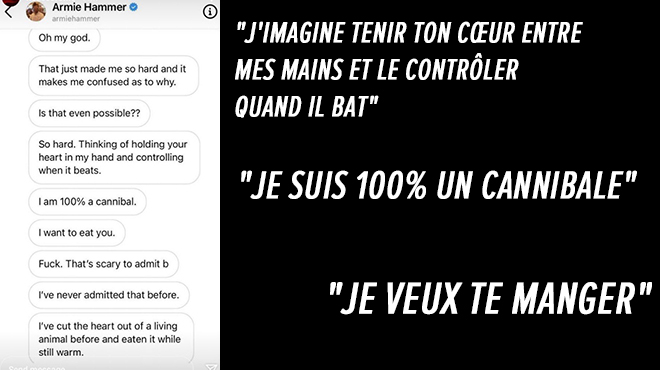 Armie Hammer is the subject of raving rumors calling him a “cannibal”. Shocking messages supposedly sent by the “Call me by your name” actor to young women have been posted on social media.

These unverified testimonies at the moment tell that the star would find pleasure in drinking the blood of his conquests. “I imagine holding your heart in my hands and controlling it when it beats. I am 100% a cannibal. I want to eat you. Shit. It’s scary to admit it. I never confessed it before. I have cut a heart from a living animal before and ate it while it was still warm,“would he have written to one of his”chatons“, as he calls young women.

This same person claims that “he is obsessed with drinking blood.” “I need to drink your blood “,” if you were by my side, I would give you a little cut and I would fall asleep sucking it“, we read over this big chilling unpacking that takes place on Twitter, audio clips and screenshots in support.”His manipulative behavior made me perceive this as love. You are not alone,“said a suspected victim on Instagram.

All the messages posted on the internet have not been authenticated. The actor remains silent. However, two ex of Armie Hammer have confirmed the veracity of these words. Courtney Vucekovich writes: “Everything about Armie is 100% true. He will finally be laid bare.“

South Korean actress Song Yoo Jung (26) was found dead in her home last weekend. Her family prefers not to reveal the cause...
Read more
Lifestyle

Yesterday evening, TF1 broadcast the final of the "Sam" series. At the casting, viewers found Fred Testot or Natacha Lindinger. For its...
Read more
Lifestyle

The wife of a great musician surprises him at his mistress

A Senegalese music star was beaten up and insulted by his wife this Sunday morning around 7 a.m. Here is the unfolding of the...
Read more
Lifestyle

what are the new movies and series to watch in february 2021?

Amazon has unveiled the...
Read more