Home World When Donald Trump goes down in history ...
World

When Donald Trump goes down in history … 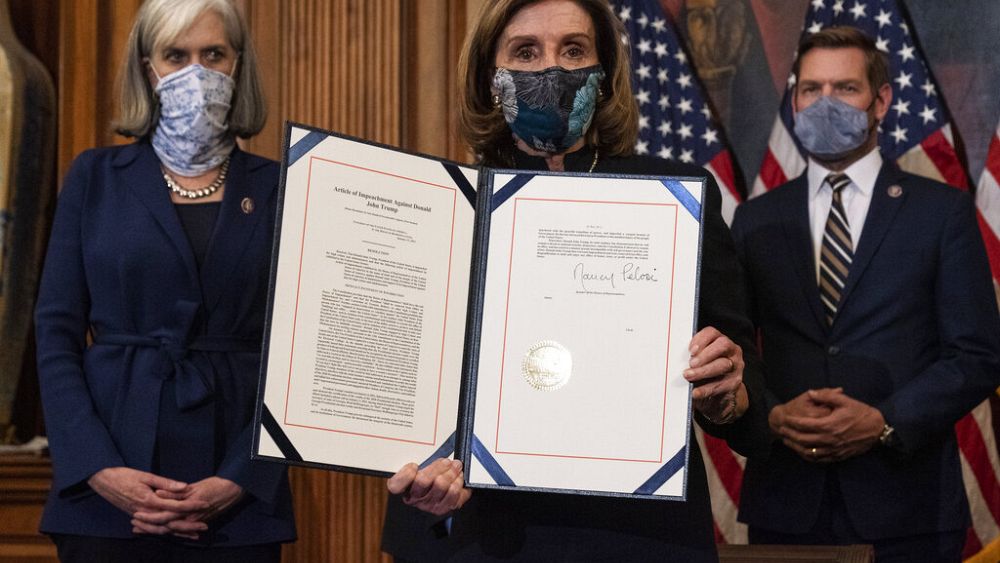 The moment is solemn, almost collected until the hammer blow that propels Donald Trump into the history books …

He is now the only president of the United States to have received a second indictment by Congress. The 74-year-old Republican billionaire is accused of having encouraged the assault given on January 6 by his supporters against the Capitol, an attack that left five dead and shook American democracy.

And with him, also goes down in history, his sworn enemy, Nancy Pelosi, Speaker of the United States House of Representatives:

“Donald Trump is an obvious and immediate danger to our nation, and once again we honor this oath to protect and defend the Constitution of the United States.”

Still traumatized by the assault of last week, the elected representatives of the House of Representatives had two hours of heated debates before the vote which ended with 232 for and 197 against.

It provoked boos but 10 elected Republican still voted “yes” to the impeachment, like John Katko, elected in New York:

“The president’s role in this insurgency is undeniable. Both on social media before Jan. 6 and in his speech that day, he deliberately promoted baseless theories, creating an explosive environment of disinformation and division.”

The others have remained loyal to Donald Trump.

“We should focus on what brings the nation together. Instead, Democrats are going to indict the president for a second time, a week before he leaves office. But why? For political questions and the fact that they want … they want to erase the president “, lamented Jim Jordan, elected from Ohio:

Next step for Donald Trump, the impeachment trial in the Senate. It won’t open until its term ends on January 20 and raises many questions. Notably the concern of President-elect Joe Biden who called on Congress to work on the priorities of its program.

“I hope the Senate will find a way to manage their constitutional responsibilities regarding the impeachment trial, while conducting the urgent affairs of the nation.”, he said in a statement, after the indictment of Donald Trump.

Among the priorities cited by Joe Biden: the confirmation of the members of his cabinet, the revival of the American economy, and the continuation of the vaccine distribution plan against Covid-19.

No allusion to his second indictment

Shortly after the vote in the House of Representatives, in a video released by the White House, Donald Trump called on the Americans to “unity”, without once mentioning his infamous second referral to trial. And he still does not recognize the slightest responsibility in the violence of last week, he assured that their authors could not be his “real supporters”:

“I unequivocally condemn the violence that we saw last week. Violence and vandalism have absolutely no place in our country and have no place in our movement. For America to become great again, it is It has always been necessary to defend the rule of law, to support the men and women responsible for upholding the law and defending the traditions and the most sacred values ​​of our nation “.

While waiting for Joe Biden’s investiture ceremony, Washington, the heart of American democracy, appears to be under siege. 20,000 armed national guards are deployed. They were in the capitol during the debates, ready to speak.

It is in front of an entire American people that the new President of the United States has taken an oath,...
Read more
World

Democrats take control of the US Senate

Two new Democratic senators were sworn in on Wednesday, giving control of the upper house to their party on the day of the inauguration...
Read more
World

From rugs to portraits, the highly symbolic decorative choices of the Biden Oval Office

Even before setting foot in his Oval Office, Joe Biden had already completely redesigned the office. Choices that owe nothing to chance.He didn't...
Read more
World

“Symbolic acts” are being considered but there will be “neither repentance nor apologies”, the Élysée indicated on Wednesday, following the submission on Wednesday of...
Read more

Italy to sue Pfizer for delays

Living wage: Unilever extends the fight to its suppliers