Find here all of our live #CONFLANS

Nine people including a minor were taken into custody as part of the investigation into the beheading of Samuel P. Emmanuel Macron will meet by tomorrow a small Defense Council. Here is what we know about the survey.

• Samuel P., murdered near the college where he taught, showed caricatures of Muhammad during a course on freedom of expression. This course has caused controversy among some parents. Explanations.

• The New Zealand Prime Minister Jacinda Ardern won a resounding victory in the general election. While 95% of the ballots had been counted, Labor led with 49% of the vote.

• The Covid-19 pandemic has killed at least 1,105,691 people worldwide since the WHO office in China reported the onset of the disease at the end of December, according to a report established by AFP in from official sources. Follow our live.

14h14 : Dozens of students and parents have placed flowers in front of the Bois d’Aulne college. Some had an “I am a teacher” poster. 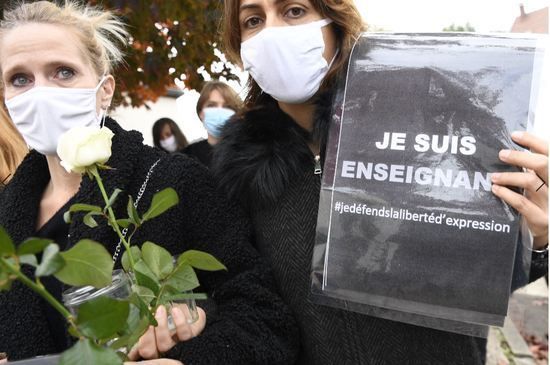 13h36 : To understand what could have pushed the assailant to behead Samuel P, the investigators are particularly interested in the controversy arising from a course on freedom of expression during which the professor would have shown a caricature of the Prophet Muhammad. Franceinfo takes a look at what we know about this episode.

13h04 : “There will be a strict, powerful framework for the start of the school year”, specifies Jean-Michel Blanquer. “It is secularism which is the foundation of our values, it is a key, which allows us to be different in our society.” 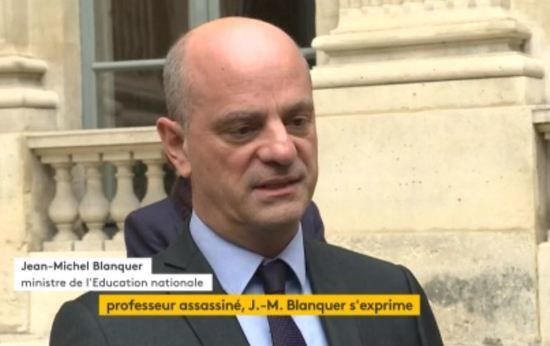 13h01 : “I want to express all the emotion of National Education (…) What has happened is unqualifiable and must be fought,” said the minister. He calls for the “serenity” and indicates that he will address the parents’ representatives.

12h31 : The State will be alongside teachers for “protect”, promised the Minister of National Education Jean-Michel Blanquer in a video message to “all the teachers of France”. The teacher “was assassinated for having given a course which had to do with a pillar of democracy: freedom of expression”, did he declare.

12h23 : “I would like to show my immense gratitude to the municipal police officers who gave the alert yesterday. To the national police officers, who neutralized the assailant. I also want to address the Conflan people: we will get up.” 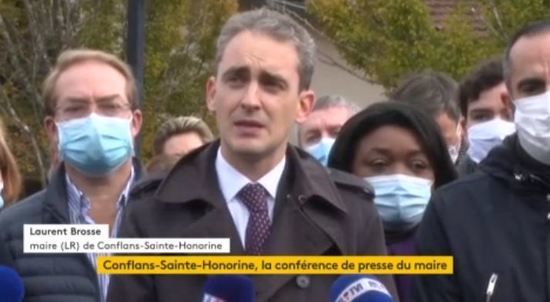 12h25 : Here is the main information of the morning:

• Nine people are in police custody the day after the beheading of a teacher in Yvelines. The anti-terrorism public prosecutor will give a press conference at 3 p.m., which you can follow in our direct line.

• The victim, Samuel P., is a 47-year-old history teacher and father. According to Franceinfo information, he showed his students caricatures of Muhammad during one of his classes a week ago, arousing great emotion.

• Some 20 million inhabitants of the Ile-de-France region and eight metropolitan areas are preparing to live their first evening under curfew, a major measure decided by the government to curb a rapidly rebounding epidemic.

• Several thousand pro-democracy demonstrators defy the ban on assembly for the third consecutive day in Bangkok, in Thailand, in the aftermath of clashes with the police. 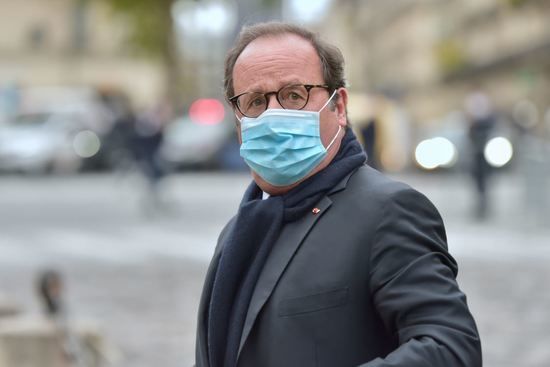 12h25 : Two reception cells are set up in Conflans-Sainte-Honorine by the medico-psychological emergency cell, indicates the town hall on Facebook. Professionals are available from today until Monday from 10 a.m. to 5 p.m.

12h25 : Here is the summary of what we know about the investigation to date:

• The man suspected of having killed the teacher was domiciled in Evreux (Eure). He was 18 years old, born in Moscow, and of Chechen descent.

• The teacher was the subject of a complaint filed by a student’s parent on October 8. This father had filed a complaint for “dissemination of pornographic images”.

• Nine people are currently in police custody: the parents, a grandparent and the younger brother of the suspect, a parent of a student from the Conflans-Sainte-Honorine college and four members of the assailant’s non-family entourage. .

12h26 : Audrey Goutard, police-justice journalist at France Televisions, takes stock of the investigation. “For the police now it is a question of whether there were any complicity.”

11:48 a.m. : In our schools, colleges, high schools, everywhere, our teachers will continue to awaken the critical spirit of the citizens of the Republic, to emancipate them from all totalitarianisms and all obscurantisms. And we will be there with them: I told their representatives this morning. 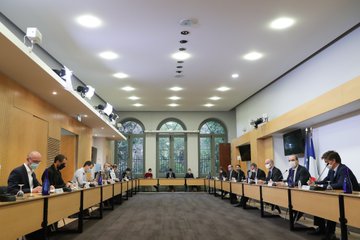 11:48 a.m. : “In solidarity with its teachers, the State will react with the greatest firmness so that the Republic and its citizens live, free! We will never give up. Never“Jean Castex said on Twitter.

11h39 : This tribute, the date of which has not yet been set, is organized in coordination with the family, said the Elysee.

11h42 : A national tribute will be paid to the professor assassinated in Conflans-Sainte-Honorine, confirms the Elysee to franceinfo.

11h43 : The press conference of Jean-François Ricard, public prosecutor against terrorism, will take place at 3 p.m. You can follow it in our direct.

11h20 : The teacher was targeted by a complaint filed by a student’s parent on October 8, Franceinfo learned from a source close to the investigation, confirming information from BFMTV. This father had lodged a complaint for “dissemination of pornographic images” because, according to him, the professor had shown his students caricatures of Mohammed, including one in which the latter was represented naked.

10h57 : “Secularism, the backbone of the Republic, was, through this despicable act, targeted”, declared Prime Minister Jean Castex in front of the teaching unions during a meeting at the Ministry of National Education.

10h56 : “We have reached a point of no return”, estimated the emergency physician Patrick Pelloux, former collaborator of Charlie Hebdo, on our antenna. Here is his interview.

10h20 : “It is very difficult to fight against this endogenous threat of people who see things on social networks or in the media and who are permeable to a doctrine of hate.”

Asked on franceinfo, the minister clarified that the assailant was unknown to the intelligence services.

10h11 : I learned with horror of the murder of a professor in Conflans-Ste-Honorine. I extend my condolences to his family and to the French. My thoughts are also with the teachers, in France and everywhere in Europe. Without them there are no citizens. Without them there is no democracy

10h11 : On Twitter, the President of the European Commission Ursula von der Leyen sent a message to teachers in France and “everywhere in Europe”.

09h53 : Hello @Antoine, the anti-terrorism prosecutor Jean-François Ricard is due to give a press conference this afternoon. We do not have any details on the schedule at the moment, but we will keep you informed.

09h53 : Hello, and thank you for your direct! Do we know what time the public prosecutor should speak?

10h31 : Manuel Valls, former Prime Minister, called on franceinfo “all the press” at “publish the ‘Charlie Hebdo’ cartoons” in “the days to come”.

09h21 : The parents, a grandparent and the assailant’s little brother were arrested in Evreux (Eure). A parent of a student who had posted a video on Facebook, calling in particular for the eviction of teaching, is also among those in custody. The others are people who are not part of the assailant’s family.

09h07 : “It’s really part of their DNA, to tell themselves that we have to work with all young people, whatever their origin, their religion, the neighborhood where they live.”

On franceinfo, the trade unionist reacts to the assassination of a history professor in Conflans-Sainte-Honorine. “Teachers will not give up“, she believes.

09h03 : The Minister of Education, Jean-Michel Blanquer is to receive representatives of staff and parents of students at 9 a.m. and promises that he will address himself by video “to all teachers, staff and families”.

09h01 : Here is the main information this morning:

• Nine people are now in police custody, as part of the investigation into the assassination of a history teacher in Conflans-Sainte-Honorine (Yvelines), franceinfo learned from a judicial source. All information can be found in our direct.

• The attacker was an 18-year-old man of Chechen origin born in Moscow. According to our information, he was unknown to the intelligence services.

Some 20 million inhabitants of Ile-de-France and eight of the main French cities, lived their first night under curfew. People leaving during curfew hours must have a special travel certificate with them.

• The New Zealander are voting today in a general election and, barring any surprises, outgoing Prime Minister Jacinda Ardern is expected to secure an absolute majority.

*The article has been translated based on the content of Source link by https://www.francetvinfo.fr/faits-divers/terrorisme/enseignant-decapite-dans-les-yvelines/direct-professeur-decapite-a-conflans-sainte-honorine-quatre-personnes-dont-un-mineur-places-en-garde-a-vue_4145371.html
. If there is any problem regarding the content, copyright, please leave a report below the article. We will try to process as quickly as possible to protect the rights of the author. Thank you very much!

in the Center-Val de Loire, a strengthening of measures, even without a curfew

For Baroin, immigration to France should be “reduced”

protests in Israel and Gaza, photos of Macron burned

a man shot in Porto-Vecchio

48 personalities are calling for new institutions to defend “full secularism”

Conflans attack: “It will be very difficult to identify with whom the killer was in contact in Syria”

Le Matin – UAFA announces the upcoming resumption of the competition

The compositions of France U21

Is the Canadian really the team with the most French-speaking players?